Brunswick County, North Carolina is strategically located in the Myrtle Beach MSA between lively Myrtle Beach, South Carolina and historic Wilmington, North Carolina, offering a broad variety of resources and amenities and livability that appeals to people of all ages, tastes and stages of life and career.

Brunswick County has experienced explosive growth over past 15 years, with residential growth coming in at the highest it’s been since the housing market crash 2007.  Much of the rapid population growth has been in the South Brunswick Islands, which consists of Calabash, Carolina Shores, Sunset Beach, Ocean Isle Beach, Shallotte and Holden Beach.  The outstanding and affordable quality of place has long been a draw for tourists, from the major metro areas within North Carolina as well as states to our north.  Many of these tourists become second homeowners and eventually relocate to the area as retirees as evidenced by the percentage growth rate in ages 60 and over which eclipses the growth rate in all other age categories.  Ample land and still-reasonable construction costs fuel growth in the region’s diverse housing stock, which offers residential options tailored to fit any preference and budget.  Several new homes communities that sat dormant for the past 10 years are now under new ownership with construction underway. 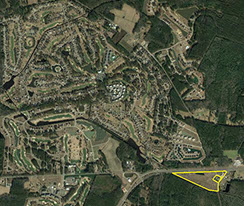 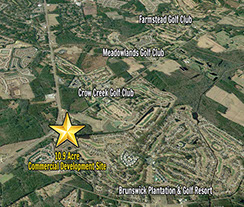 +-26 acres of prime development land close to the intersection of Hwy 17 and Hwy 904 interchange, diagonally across from McDonalds at the Sunset Beach interchange. 765 ft. of frontage on Hwy 17 with four DOT access points. 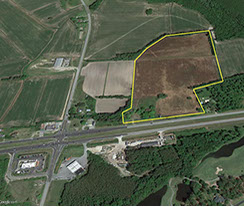 Searching for a Business Location in the South Brunswick Islands?